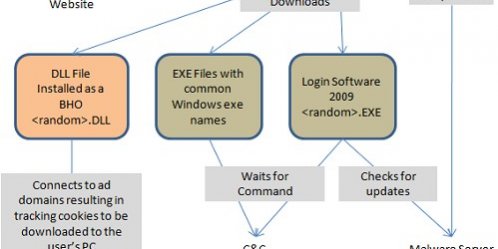 Viruses, malware, worms, adware, there are many different kinds of online threats.

It can be confusing for one to understand the level of dangerousness of each, what they do and how to remove. In this post, I will try to demystify this and shed some light on how they sneak into your machine and stay undetected. If you think that document is missing something, please let me know I’ll be happy to add it.

It’s important to note that a malware can be of several types above. Actually most of them are, for example Zeus is a Banker, with Password Stealer capability, as well as Trojan to turn the machine into a zombie PC (part of a botnet).

Why are malware made?

They of course are made to make money. A lot of people are not understanding how malware writers make money.
It’s indeed a very lucrative activity, here’s a quick list of how they earn money:

How you get infected by malware

How are malware installed on your machine

A malware will often be deployed in several steps. The dropper is the file that is served first (the one you downloaded), that dropper is usually heavily encrypted, packed to bypass antiviruses. It will either unpack the payload from a resource, or download it directly from a server. Then the payload is executed.

Once executed, the payload will very often “install” itself to survive at reboot with a persistence item (see below). Additionally it can load several components to hide itself and/or harden its removal. Then it will perform the task for which is was designed.

Flying under the radar

To remain hidden in the system, malware will often use several tips often called “Rootkit”:

To remove an infection, you can do it with several ways:

Removing both is better, but either way would prevent the malware from loading. RogueKiller is able to detect and remove both the payload (file, or process) and the persistence item.