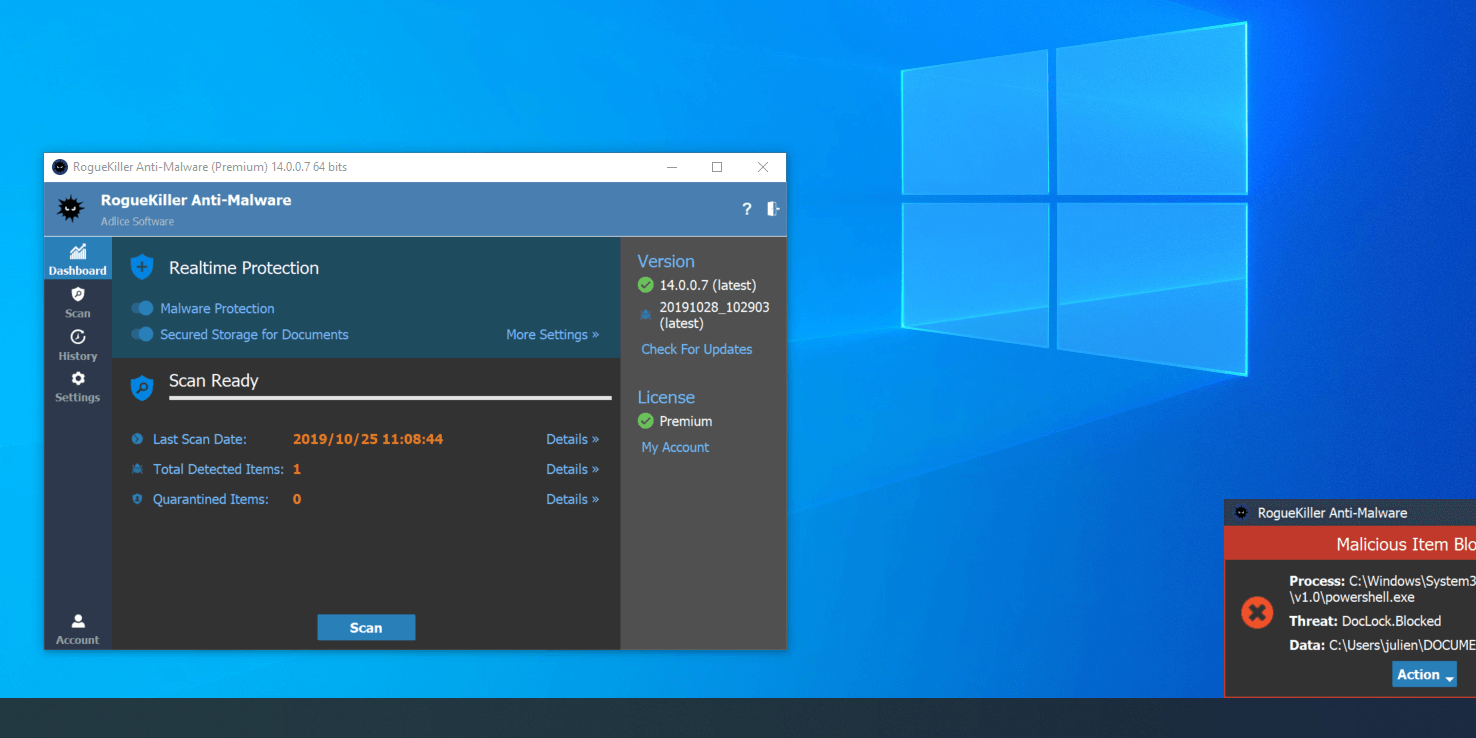 We are pleased to announce our flagship, RogueKiller Anti-malware, is finally available for version 14 BETA testing. Version 14 is a very big milestone for us because it introduces a major new feature that customers have been asking us for a long time: Real Time Protection. Let’s take a look.

RogueKiller 14 features a modular real time protection against malware. Our first version (14.0) will give you access to the 2 first modules: “Malware Protection” and “Documents Protection”.

To do so, we had to create a 2 new components that will run in the background on your machine: A kernel driver and a service. Please note that for this particular reason the real time protection will not be available on the portable version, only with the installer. Later on, with intermediate new versions, we will add new protection modules to reduce the attack surface of your machine.

The malware protection module is classic, yet very important module. It scans files before they are executed and can deny execution in case of malware. The real time scanner is based on the filesystem scanner, with the same powerful heuristics, AI and cloud modules to make sure all known and unknown malware are detected before they are harmful.

Ransomware are the #1 threat on internet nowadays, we had to do something to protect our customers.

Documents protection module is a very conservative way to protect against Ransomware, based on whitelist. The principle is easy, no program can modify the documents in the locations you choose to protect (pre-defaulted to “My Documents”), unless they are in an “Exclusions list”. It requires a bit of setup at the beginning, but past this period it’s a very effective way to prevent your documents from being held for ransom. ERRATUM: Starting with BETA 4, we have added heuristic rules to prevent most legitimate programs from being detected.

Why a new Protection layer ? Does it work with other Antivirus ?

Yes it works with other classic Antivirus, and we encourage you to keep your existing protection working alongside with RogueKiller.

RogueKiller Anti-malware protection is mostly based on heuristics, and works well in some particular conditions where classic Antivirus may fail. We have designed our protection to be low footprint / low consumption, so having multiple protections layers is really a benefit and won’t affect performance a lot.

All protection modules are available to Premium registered users, with no extra costs.

Once version 14 will be available in production (as stable), the software update will automatically deploy and enable the protection modules on your machine. The same way, when new modules will be released they will be deployed smoothly through software updates. We encourage our FREE users to upgrade now if they haven’t yet, to take advantage of this extra protection layer.

RogueKiller anti malware 14 is now officially released in production. The software installer can be downloaded with the following link.

If you find anything (behavior bug, things to improve, visual bugs, …) or have any idea to improve the software before it’s released for everyone, please contact us.