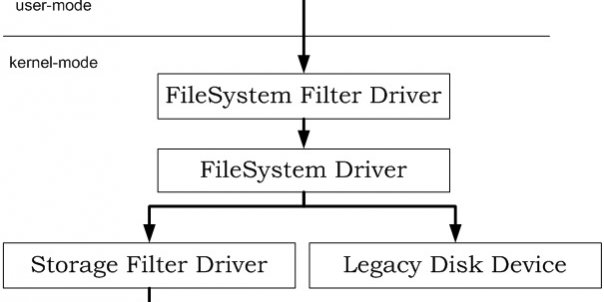 This is the third part of this series about Kernel Mode rootkits, I wanted to write on it and demonstrate how some rootkits (Ex: Keyloggers) do to intercept keystrokes by using kernel filters.

A kernel filter is a driver/device attached to another device, so that it’s inserted between 2 different layers of a driver stack.

For each driver, there are some major functions that receive IRPs to process (for example, the disk driver stack can receive a disk read request). Each IRP is processed by the current driver, and passed down to the next driver of the stack. Once we reached the last driver, it’s processed by the hardware and comes back in reverse order. Each driver of the stack is actually a filter and can modify the information. For example, if we try to read a specific file, we can just deny access, or we can modify the bytes directly in the system buffer.

Kernel filters are used by malware or legit drivers to do multiple things, from keylogging to disk access filtering, encryption, …

We’ll study a practical case of highly stealth keylogger, deeply hidden in the kernel. Disclaimer: This is not a tutorial to make a rootkit, but a practical case for educational purpose only. Anyway, this is covered for decades on other websites…

The code is self explaining, fully commented.
We get an IRP from the IRP_MJ_READ function coming from userland, and we tag the IRP so that we get a completion routine hit when we come from the hardware (keyboard). In the completion routine, we just modify every ‘r’ keystroke by a ‘w’ keystroke.

TDL4 rootkit uses kernel filters to attach to atapi driver stack, and filter disk access to hide it’s infected MBR. However, TDL4 doesn’t use a classic kernel filter, but a reverse attaching (not attached above, but attached below the device stack). Here’s some screenshots about what it looks like seen from the kernel. Note: In these screenshot, the practical case above was also started, this is why you can see a detected keylogger as well.

To detect kernel filters, we need to load a driver that will scan recursively all attached devices of a driver, and get for each the driver name and module. To remove a Kernel filter, you just need to remove the filter device from the attached pointer. Pretty straight forward, but can be dangerous (BSoD).