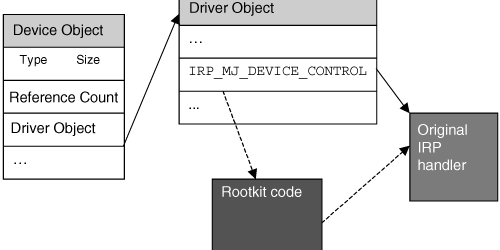 This is the second part of this series about Kernel Mode rootkits, I wanted to write on it and demonstrate how some rootkits (Ex: TDL4) do to hijack disk access by using IRP hooks.

An IRP is an object used to communicate between all the different layers of a driver stack.

For each driver, there are some major functions that receive IRPs to process (for example, the disk driver stack can receive a disk read request). These major functions are hold in a table of pointers.

Any loaded module can then detour the execution flow of a major function to filter any attempt to access a particular file (in our example), and hide or deny access to it.

IRP hooks are used by malware to do multiple things, from keylogging to disk access filtering, …

Imagine you’re a malware writer, and you need to protect your binary file. You don’t want anyone to be able to remove your malware so you protect the file. Disclaimer: This is not a tutorial to make a rootkit, but a practical case for educational purpose only. Anyway, this is covered for decades on other websites…

I’ll not show you how to hook the major function. I’ll just write the hooking filter function. We want to protect a file, so we will target the IRP_MJ_CREATE function, because it’s necessary to get a handle on a file before modify it. I haven’t told before, but as it’s kernel mode code, you’d need to code a driver.

The code is self explaining, fully commented.
If the filename contains the string « _root_ », we setup a completion routine for the current IRP. In the completion routine, we just modify the status returned with an error code.

This means each time we try to get a handle on a protected file, we have that error. No handle means no right for touching it (read, write, rename, …).

To detect such a hook, we need to load a driver that will scan the major functions table in the related driver and compare each pointer to the address range of driver’s module. If one is outside this range, it’s probably hooked by some module. Pretty easy to detect.

However, some other tips exist to hook the major functions, some rootkits do not change the address in the table but change the assembly instructions of the first bytes in the function itself to point to the hooking module. This is called Inline hook (not covered here).

To remove a IRP hook, you need to retrieve the true address of the major function (somewhere…) and replace the bad address in the table. That should remove the filter and let the rootkit unprotected. Pay attention, the restore action must be atomic (else we can have some BSoD).